2018 was a volatile year for the markets, with investors being concerned about a less bright economic future. The strong decrease of risky assets makes us believe in a trend reversal. At this stage, our central scenario still maintains that the current upward cycle will persist, even though financial tensions are beginning to "bite" on growth. Lack of visibility / liquidity, in combination with volatility, have convinced us to fall back, tactically, to a more neutral position in terms of risky asset allocation.

A year that marks a new trend

After 2017, which was a particularly good year for equities, 2018 ended up being  more volatile. Equity markets began the year with a slow climb to the heights, before tumbling into several phases of correction.

Initially, these correction were mainly based on the fear of a  faster-than-expected tightening of monetary policy by the US Federal Reserve (Fed) and on Donald Trump’s statements to erect customs barriers for US imports, putting on concerns about a trade war.

In the Eurozone, as early as May, attention turned to the Italian political crisis and the uncertainties surrounding Brexit.

Finally, the last quarter of the year was particularly difficult for risky assets, in particular equities. While the Eurozone was already suffering, US equities, which had until then appeared to be immune, turned sharply upside down at the end of the year. This fall in US markets was indeed historic, as it was the worst month of December in nearly 90 years and the worst month of the S&P500 since 2008. This latest wave of equity declines marks a change in market dynamics, as stock markets are becoming more bearish..

On the fixed-income markets, these same uncertainties have led to a return of volatility, fuelling a flight to quality by investors. For example, in the Eurozone, the core rates (Germany and France) were on a downward trend, whereas Italian bond yields rose due to its own specific uncertainties. In the United States, long-term interest rates were overall up in 2018, driven by a booming domestic economy and an American Federal Reserve (Fed) continuing its cycle of raising its key rate. 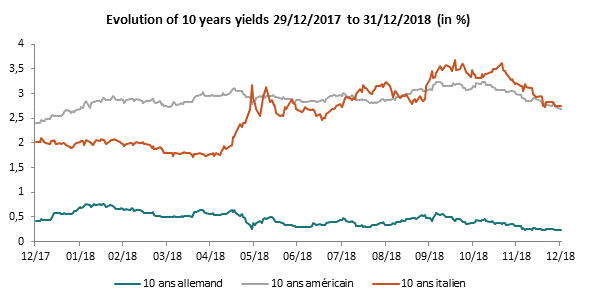 Finally, the credit market saw its spread widen in 2018, due to a generalized risk aversion that persisted all through the year. Moreover, the progressive withdrawal of central banks fuelled fears of diminishing future monetary support on the credit market.

The heavy fall in the last quarter, and more particularly in December, is based on fundamental reasoning, namely that the idea of a “normalization of growth” would lead quite naturally to a “normalization of risk premiums”. However, this correction has been amplified by the combination of three key points:

On the equity markets, these worries have reinforced a shift that was already perceptible in October, namely a market turning its gaze away from long-term dynamics, which are relatively promising (opportunities of new technologies, such as the self-driving car, digitization and robotization) to focus instead on short-term dynamics, which are more anxiety-inducing.

This change is reflected in some very marked downturns on the markets, reinforced by the powerful effect of systematic strategies, which structurally become selling strategies with the increase in volatility and downward market trends.

The outflows in equities has been massive : in December alone, the total amount of share buybacks in developed markets attained 60 billion dollars. Compared to the historic positioning of investors, December marked the biggest monthly switch to cash, bonds and defensive stock sectors.

The downward trend was all the more pronounced as it was taking place at the end of the year in a context of drying up liquidity with a reduced number of market participants.

Does the fall in risky assets change our central scenario ?

At this stage, our central scenario remains that the current upward cycle will persist, even though financial tensions are beginning “bite” on growth.

In our economic scenario published in autumn 2018, we anticipated continued growth over the next two years, but with growth figures converging towards their “potential” limits by 2020. This conclusion, predicting a maintain of the upward cycle, was based on the following analysis: a global economy showing no excess in terms of stocks, production or investment; rising wages and improved labor markets sustaining consumer spending and maintaining the cycle without reducing corporate profit margins; economic policies remaining favorable, with fiscal policies that are not restrictive (United States) or are even more accommodating (Europe) and with central banks that will not take any risks with the recovery.

This central scenario remains valid, especially given recent positive announcements: the big drop in oil prices should boost the purchasing power of households; there is a shared desire for trade negotiations between the United States and China; the German automotive sector is showing signs of recovery; the measures announced in France should boost consumer spending, and the Chinese authorities are willing to take steps to stimulate recovery (subsidies for car purchases, elimination of restrictions on real estate purchases and reduction in central bank base rates).

What factors would indicate that the markets are reconnecting with our central scenario ?

In addition to the absence of any major break in the cycle, we have identified three types of catalyst that can put market trends back in phase with our central scenario: the monetary policies of central banks, technical factors and micro-economic aspects.

Regarding central banks, we remain convinced that they will not take any risks with growth and will continue to be pragmatic. They have already warned that they will be attentive to the financial context.

Concerning technical factors, last December, the lack of liquidity and buy-side players led to a much more panicky and chaotic response of the markets. The beginning of 2019 is important in this respect: the number of market players will increase, and the time horizon of investors will lengthen. The context will then be more favorable to positive news, especially now that the overall market sentiment has reached an extreme low of pessimism. However, given the current level of confidence, a fundamental catalyst will be needed before any positive rebound can take place.

From this point of view, the upcoming earnings releases and, more particularly, the future outlook described in managers’ reports will be strongly scrutinized. Results should be expected to fall short of the heights of 2018, since the slowdown of the final quarter was stronger than anticipated on many value chains. However, investors will put into perspective this slowdown against the strong fall in share prices, which in some sectors was considerable.

Overall, a general trend news trend confirming a slowdown but without hitting a cyclical turning point, would be positively received by the markets.

Positioning in our portfolios

With the lack of visibility / liquidity and the rise in volatility we have, tactically, reduced our exposure to a more neutral position in terms of risky asset allocation. With the fall in the risk/reward trade-off of these assets, we have opted for an opportunistic approach.

In terms of geographical allocation, we do not prioritize any particular zone in the short term: in the US, profit forecasts are being more strongly revised, while the Eurozone is currently going through a problematic political period, with social tensions in France and the Brexit negotiations.

In our equity portfolios, over the last three months, we have started to rebalance our exposures towards a more defensive approach, to the detriment of the cycle, with the aim of improving our resilience to increasing market volatility, that is expected to remain throughout 2019. We have reduced our liquidity risk by reinforcing our market exposure to large caps, to the detriment of small and mid-caps, and we have expanded the diversification of our convictions.

In our fixed-income portfolios, we remain cautious and underexposed to interest rate risk. The current low level of the 10-year German yield, the political uncertainties that still remain and the announced ending of accommodating monetary policies in the United States and Europe, together with the need for some countries to raise funds on the financial markets (for example, to fund the introduction of social measures in France and Italy) are not conducive to any loosening of interest rates.

For our private debt portfolios, we are also maintaining a cautious position, given the liquidity problems and the increasing volume of specific risks/defaults.

Before investing, each investor must read the prospectus or the key investor information document (KIID) of the UCITS. These documents and other periodical documents can be obtained free of charge on request from Groupama AM or on our website www.groupama-am.fr

The information contained in this publication is based on sources that we consider to be reliable, but we do not guarantee its accuracy completeness, validity or relevance.