We use cookies to analyze information about your visits and to guarantee you the best experience on our site. By continuing your navigation, we will consider that you accept the use of cookies.J'accepteJe n'accepte pasRead more
Home » Financial markets and news » Private: Publications » G Fund Alpha Fixed Income 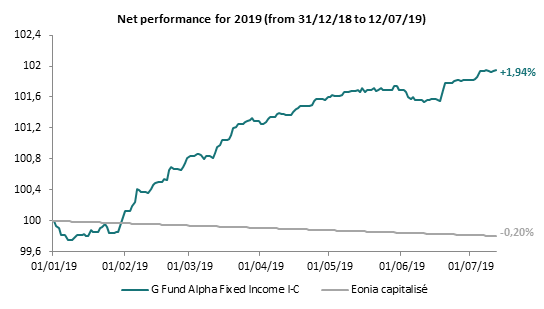 As proof that the fund is able to shun directional market risks, G Fund Alpha Fixed Income also registered positive performance from 23 April to the end of May, a period that was marked by difficulties in the credit markets. In other words, a credit spread was observed on the euro credit market over this period, while the G Fund Alpha Fixed Income grew in value by 0.18%: 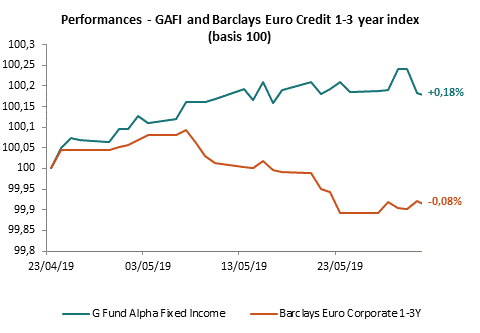 At the end of last year, we accumulated new strategies in our portfolio. In a dislocated credit environment, these strategies were initially not profitable for the end of 2018, but we – correctly – decided to maintain our positions.

So, we entered 2019 with a significant weight of strategies in our Alpha component(1), with major potential for recovery.

At the end of August 2018, we had incorporated a synthetic pair trading strategy on Renault and Peugeot: Long Renault risk (short(2) CDS(3)) / Short Peugeot risk (long(2) CDS). Although Peugeot’s operational results were admittedly very good, the Peugeot CDS was quoted almost the same as the Renault CDS, which seemed exaggerated to us. It was then that we decided to initiate this strategy. However, following the governance scandals at Renault at the end of last year, we revised our take-profit target downwards, before exiting the strategy at the end of March. 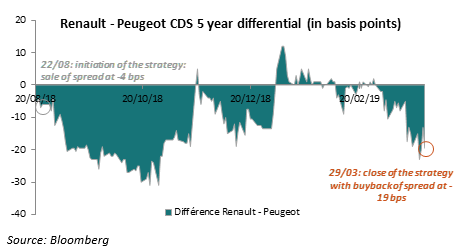 Very recently, in July, we implemented a spread strategy between a private debt security and its sovereign equivalent: this involved one issue from a public corporation, the Italian railway company Ferrovie dello Stato, with the implicit guarantee of the Italian State, against a sale of the Italian interest rate Future, in order to hedge against duration risk. The financial stability of Ferrovie dello Stato confers a spread that is generally lower than for its sovereign equivalent. However, the recent excellent performance of Italian rates following the smoothing of relations between the Italian government and the European Commission, combined with the accommodating bias of the ECB, had resulted in a reduction of the spread between sovereign and corporate debt, to the detriment of the latter (spread of 17 basis points). So, we positioned ourselves for a return to a situation closer to normal and took our profits a few days later, when the spread had risen to 37 basis points.

We have been very active on the more tactical strategies, benefitting from primary market prema that are judged to be particularly attractive, especially at the beginning of the year and, more recently, in June.

For example, we can cite Medtronic, a very large medical equipment company. Since it does not have the same renown on the other side of the Atlantic, Medtronic took the time to produce a quality roadshow and offer a substantial premium on an issue in euro.

Also, we were able to profit from a fungible issue strategy, by positioning ourselves on a new bond issue from Logicor, offering a premium higher than an existing bond while having identical characteristics.

We have also piloted the credit protection leg by massively selecting the iTraxx Xover (4). This hedge functioned well compared to other credit derivatives, and so in early May we decided on partial arbitrage via iTraxx Main(4).

The yield curve of the Danish issuer AP Moller Maersk (rated BBB by the credit rating agencies) seemed to us in 2018 to be particularly steep on the 2022-2026 segment. So, we held the March 2026 bond in our portfolio, anticipating a flattening with the shorter-term bonds of the same issuer. In February, we were already able to profit from this strategy.

We also profited in March from our positions on the Japanese issuer Takeda, a major player in the pharmaceutical sector that acquired its Irish counterpart last year. To ensure the smooth financing of this major transaction, Takeda issued euro bonds in November of last year with a premium that we considered generous. This was because, compared to a comparable pharma giant such as Bayer, which is mired in the legal complications of its subsidiary Monsanto, the premium seemed attractive. 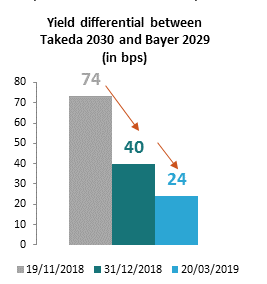 Tightening of the premium between the Takeda 2030 bond and the Bayer 2029 bond was gradual, because Takeda had a buyback option that initially frightened off investors. Finally, the launch of a Hybrid bond by Takeda during 2019 rendered the previous Takeda bonds more senior and therefore more certain.

Finally, the return to generally accommodating language by the European Central Bank enabled our core pocket, which aims to give the portfolio high liquidity and low volatility, to perform well.

Our vision for the next few months

The fears that Central Banks would be less supportive to the bonds markets had worried many investors, causing major dislocation and illiquidity on the market at the end of last year. These fears have now dissipated.

That is why we are confident that the current revaluation of our portfolio strategies will persist.

For example, during the spring, we initiated a negative base strategy on a German issuer in the real estate sector – with simultaneous purchase of the bond and purchase of the CDS protection from the same issuer for the same maturity, a strategy which registers a large valuation spread between the two instruments, while offering a positive carry.

Judging by reimbursements and new issues, many companies are now behind in their financing programmes. We therefore expect a more dynamic primary market by the end of this year, in particular after the summer break, which should provide new investment opportunities.

(1) Alpha : a measure of the ability of an investment manager to create value by being able to detect the securities that yield perform better returns over a given period than would normally be expected given their level of risk

(3) CDS : Credit Default Swaps. A CDS is a derivative product that hedges against the risk of default by a debt issuer

This document contains information concerning G FUND – ALPHA FIXED INCOME and G FUND – ALPHA FIXED INCOME II, a compartment of G Fund (also referred to as “the SICAV”), a Luxembourg-based undertaking for collective investment in transferable securities (UCITS), covered by part I of the Law dated 20 December 2002 and constituted in the form of a “SICAV”(Société d’Investissement à Capital Variable – a European publicly traded investment company structure for open-ended funds). The SICAV is registered with the Luxembourg Trade and Companies Register under number B157527. Its registered office address is 5, allée Scheffer, L-2520 Luxembourg. G Fund was authorized for trading by the Luxembourg financial authority CSSF (“Commission de Surveillance du Secteur Financier”).