We use cookies to analyze information about your visits and to guarantee you the best experience on our site. By continuing your navigation, we will consider that you accept the use of cookies.J'accepteJe n'accepte pasRead more
Home » Financial markets and news » Private: Publications » G Fund Alpha Fixed Income – 2019 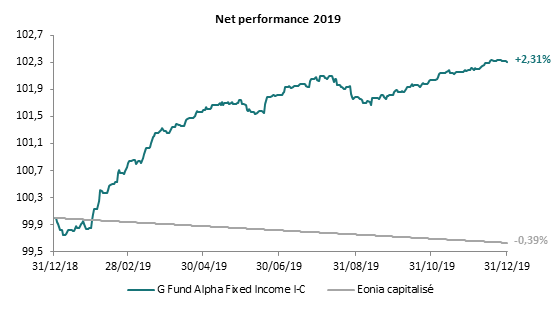 At the end of 2018, we had accumulated numerous strategies in our portfolio. In a dislocated credit environment, these strategies had suffered, but we were able to maintain our positions. So, we entered 2019 with a significant weight of strategies in our Alpha pocket(1), with important potential for recovery.

This recovery began to materialize during January, thanks to our strategies on undervalued bonds versus other curve segments from the same issuer or versus their peers on the same curve segment, such as the 2030 bond of Japanese company Takeda in the pharmaceutical sector, which was considerably undervalued compared to a 2029 bond from Bayer, despite the fact that Bayer was entangled in controversies involving its subsidiary Monsanto.

Performance was also boosted by purely synthetic strategies, with:

Intense activity in the portfolio

Alpha strategies represented a sizable part of the assets at the start of 2019. With increased profit-taking over the first six months of the year, the share of the Alpha pocket was temporarily reduced relative to the core component, which comprises the most liquid assets. Portfolio activity was boosted by highly tactical strategies, such as a Long Corporate / Short Sovereign strategy on the Italian national railway company or fungible issue(5) strategies, for instance an issue from Logicor: 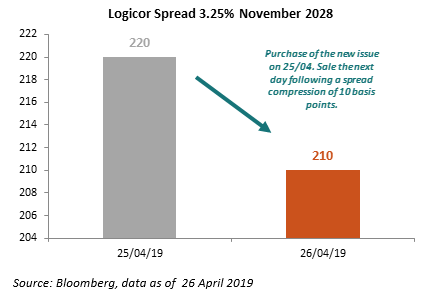 At the end of August, the Alpha pocket again increased, in particular under the effect of implementing new negative basis strategies and event-driven(6) strategies, notably in the German real estate sector. We also aimed to be more reactive in attempting to capture the premium offered by certain “ESG”(7) fixed-income securities, in a context where supply remains limited compared to the growing demand by financial investors, who are growing increasingly sensitive to the challenges of the energy transition. This rush to invest was clearly visible on the occasion of a new issue by Enel, which in 2019 launched the first SDG bond (Sustainable Development Goal), delivering an annual coupon of 25 supplementary basis points if it fails to meet its green energy goals by 2021. 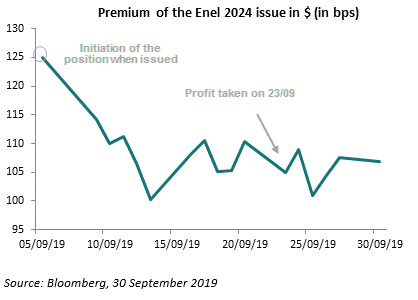 At the end of the year, new profit-taking operations were realized, in particular after capturing premiums on the primary credit market.

New strategies that have not yet delivered their full potential

Despite the fact that 2019 was a highly successful year, the portfolio still contains various alpha strategies that have not yet returned their potential. This particularly concerns negative basis strategies (purchase of a bond and purchase of a protection via a derivative having the same maturity on the same issuer, aiming for convergence of valuations between the two instruments) implemented during 2019.

For example, we initiated a negative basis strategy on a German industrial issuer which had an undervaluation of about 70 basis points on its corporate bond compared to the CDS derivative instrument when the strategy was launched last September. We also introduced negative basis strategies qualified as “imperfect”, with a CDS protection that reached maturity before the bond. We took this liberty in order to optimize return prospects, especially in the case of a French company in difficulty in the mass retail sector: here, our main aim is a spread widening between the “secured” and “unsecured” premiums. In addition to the impending arbitrage opportunities that will materialize in 2020, these positive carry strategies offer the fund potential for appreciation.

For the coming months, we expect to see a dynamic primary market, which should reveal new opportunities for arbitrage. Also, the period of quantitative easing of the European Central Bank is traditionally a period when the basis effect is favourable to the fund, with outperformance of the cash securities market versus the synthetic credit market. We therefore remain confident in the investment process and in our ability to generate added value over the next few months.

A strategy adapted to a low rate environment

In 2019, certain phases of rise in interest rates and in credit premiums temporarily affected the fixed-income markets. Aiming to remain immune to interest rate and credit risks, G Fund Alpha Fixed Income was able to negotiate these periods quite safely: 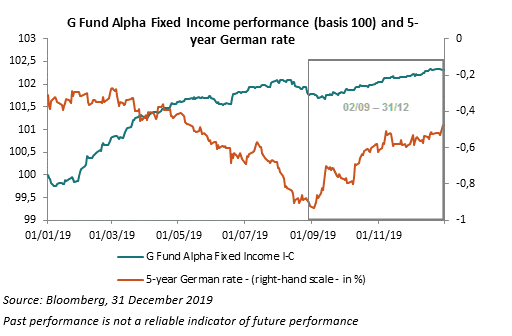 With the end of the summer break, interest rates started rising in September. That did not prevent G Fund Alpha Fixed Income (part I-C) growing 0.51% between 2 September 2019 and 31 December 2019.

• Periods of increases in credit premiums: 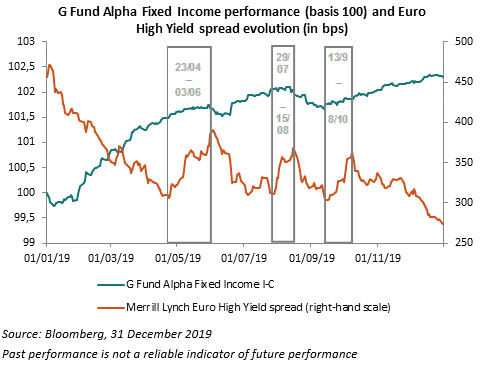 After the remarkable performance of fixed-income assets last year, valuations this year have become less attractive. In an environment of low interest rates and tight credit premiums, we consider that an approach of the type proposed by G Fund Alpha Fixed Income, i.e. a diversifying approach, decorrelated from the markets and with low volatility, can make sense in a bond asset allocation.

(1)Alpha: a measure of the ability of an investment manager to create value by being able to detect the securities that yield better returns over a given period than would normally be expected given their level of risk.

(3)CDS: Credit Default Swaps. A CDS is a derivative product that hedges against the risk of default by a debt issuer.

(5) Fungible issue: a bond is said to be “fungible” if its issuer has already issued a bond under the same terms (same currency, same coupon, same maturity etc.). We aim for short-term convergence between the price of the fungible bond and that of the existing bond.

(6) Event-driven strategy: strategy of identifying special events in the life of a company (recapitalization, break-up, merger etc.) that can potentially cause major variations in prices.

(7) This acronym designates the Environmental, Social and Governance (ESG) criteria used for conducting extra-financial analysis of a company.

This document contains information concerning G FUND – ALPHA FIXED INCOME and G FUND – ALPHA FIXED INCOME II, a compartment of G Fund (also referred to as “the SICAV”), a Luxembourg-based undertaking for collective investment in transferable securities (UCITS), covered by part I of the Law dated 20 December 2002 and constituted in the form of a “SICAV”(Société d’Investissement à Capital Variable – a European publicly traded investment company structure for open-ended funds). The SICAV is registered with the Luxembourg Trade and Companies Register under number B157527. Its registered office address is 5, allée Scheffer, L-2520 Luxembourg. G Fund was authorized for trading by the Luxembourg financial authority CSSF (“Commission de Surveillance du Secteur Financier”).