We use cookies to analyze information about your visits and to guarantee you the best experience on our site.By continuing your navigation, we will consider that you accept the use of cookies.I agreeI disagreeRead more
Liste d’actualités » G Fund Alpha Fixed Income – 2020 review 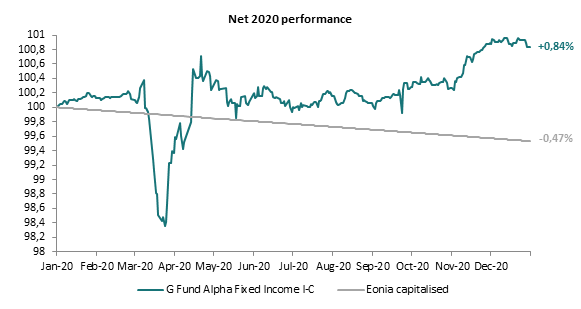 Over longer investment horizons, the performance of G Fund Alpha Fixed Income and its reference index (capitalized EONIA) are shown below:

Sails trimmed at the beginning of the year

After the close of the year 2019, during which the credit market was trending upwards without any clear distinction between issuers, followed by the beginning of 2020 with a continuation of the same conditions, we were hoping that arbitrage opportunities would be generated by a risk aversion period – which we were expecting, but not on this scale. So, the alpha pocket(1), where we place our credit arbitrage strategies, was reduced to about 20% of the fund, with more than half in single-name negative basis strategies (i.e. going Long bond and Long CDS(2) on the same issuer), which do not contain idiosyncratic risk.

Until the financial market crash in early March, this configuration gave the fund near-immunity, with the CDS hedges performing their function very well.

However, the fund was finally sucked into the downward spiral

As from 9 March, the “dash for cash” reflex of the markets resulted in massive losses on the bonds in our portfolio, losses not offset by equivalent spread increases in CDS, because the reason investors were selling their bonds was to obtain liquidities and not out of fear of issuer default.

As a result, the fund’s performance was impacted in both of its two pockets:

For example, our negative basis strategy on ThyssenKrupp, which represented a major share of our alpha pocket, suffered significantly during this period, with a negative risk premium of 4.48% at the peak of the crisis on 23 March, as shown in the graph below, before returning to more normal levels over the next few weeks. 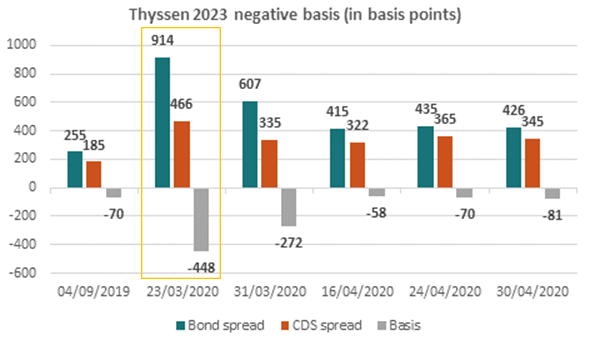 Pragmatism and opportunism to restore performance at pre-crisis levels

However, the dislocation of the credit markets during this financial storm opened up new arbitrage opportunities, which G Fund Alpha Fixed Income with its very ample store of liquidities, was able to start seizing as early as on 20 March.

Following the announcements by the European Central Bank (ECB), as well as by other central banks, we invested substantially in bonds having largely defensive profiles, relatively unexposed to the Covid-19 effects and, most importantly, eligible for the ECB’s corporate sector asset purchase programmes (CSPP) These operations, focused particularly on the primary market, where spreads were considered attractive when the market reopened after the worst of the crisis. These long positions were initially hedged by purchasing iTraxx Xover(4) credit protection, and then this hedge was partly arbitraged to iTraxx Main(4).

In an environment of market upheaval, this relative-value strategy possesses the advantage of being easy to implement and easy to unsettle. We also judge this strategy to have an asymmetric risk / reward profile, because the risk is reduced by the buyer of last resort, namely the ECB.

As mentioned above, this strategy enabled the fund to bounce back rapidly after the turbulence of the month of March. The strategy functioned very well during the bounce-back phase of the markets, in particular in late March and April. We carefully steered this pocket in accordance with opportunities and market conditions all through the year.

These strategies generally performed well in 2020. We took profit on some of them, for example Air France, with an outperformance of the bond instrument compared to the derivative of approximately 300 basis points: 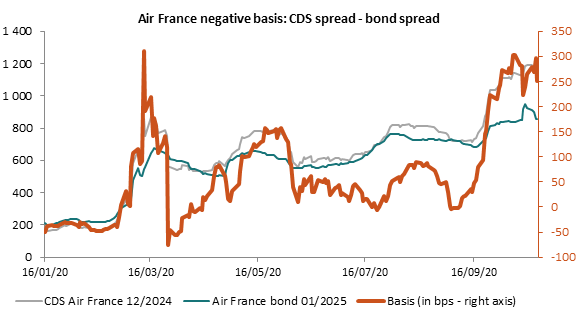 Other alpha strategies contributed to performance

All through the year, we benefitted from the good performance of certain bonds that are currently very popular with investors, in particular green and hybrid bonds. Through our investments in these instruments, we were well-positioned for their outperformance compared to the CDS indexes such as iTraxx Main or Xover.

Also, during the first part of the year, we maintained our synthetic strategy for implicit decompression of CDS indexes (purchase of ‘iTraxx Xover and sale of iTraxx Main).

Finally, to a lesser extent, we have profited from fungible issue strategies (strategies that aim to profit from the convergence of premiums between a new, cheaper security and an existing security having identical features), in particular on a Finnish issuer in the commercial real estate sector.

A reservoir of performance

Despite the good year-end performance, we consider that the strategies still present in the portfolio continue to embed potential, as in the case of our retained negative basis strategies. Also, in our discounted bonds pocket, we currently hold two bonds of an Italian bank, since we expect these issues to benefit from a capital tie-in with a peer having more solid credit fundamentals.

Finally, the outperformance of the credit derivatives market compared to the credit bond market over the last few months is a future relative factor that favours our arbitrage strategies.

Monetary support and government aid programmes have provided vital life support to many companies during the crisis. 2021 will be a decisive moment for certain of these companies, as their robustness and solvency will be challenged by the financial markets. For example, increased deterioration of the debt profile could cause Credit Rating Agencies to downgrade the rating of these companies to High Yield(3). This type of event frequently triggers valuation differences between the cash bond and derivatives markets, creating opportunities for funds such as G Fund Alpha Fixed Income.

A strategy adapted to the current market environment

In an environment of negative interest rates and high volatility, the search for absolute performance with a relatively low-volatility approach decorrelated from the markets can make sense in fixed-income-type asset allocation.

In fact, the fund is also well positioned for the possibility of a return to risk aversion, since instruments such as iTraxx Xover, which are frequently used by investors as hedges for the intensified risk of deterioration of the macroeconomic prospects, function well in these cases.

We therefore remain confident in the investment process and in our ability to generate added value over the coming months.

(1)Alpha: a measure of the ability of an investment manager to create added value over a given period.

This document contains information concerning G FUND – ALPHA FIXED INCOME, a compartment of G Fund (also referred to as “the SICAV”), a Luxembourg-based undertaking for collective investment in transferable securities (UCITS), covered by part I of the Law dated 20 December 2002 and constituted in the form of a “SICAV”(Société d’Investissement à Capital Variable – a European publicly traded investment company structure for open-ended funds). The SICAV is registered with the Luxembourg Trade and Companies Register under number B157527. Its registered office address is 5, allée Scheffer, L-2520 Luxembourg. G Fund was authorized for trading by the Luxembourg financial authority CSSF (“Commission de Surveillance du Secteur Financier”).