We use cookies to analyze information about your visits and to guarantee you the best experience on our site. By continuing your navigation, we will consider that you accept the use of cookies.J'accepteJe n'accepte pasRead more
Home » Financial markets and news » Private: Publications » Macroeconomic scenario 2019-2021

Our economic scenario for 2019 to 2021 is divided into two sub-periods, namely an initial phase, corresponding to the next 18 months, with global growth slowing slightly in both the developed world and emerging markets, and a second phase, starting in the second half of 2021, with the prospect of an end of cycle in the United States.

For the next 18 months, the economic environment is characterized by a state of “neither-nor”, in other words “neither a sudden stop, nor an acceleration”, but a gradual slowdown in global growth.

“Neither a sudden stop…”: global industry is currently in recession; however, the risks of recession spreading to the other sectors of the economy (in particular services) are limited, both because households will continue to be the strong link of growth everywhere in the world and because the recent simultaneous easing of monetary policies in the developed and emerging countries constitute effective economic buffers.

“…Nor an acceleration”: first, trade conflict is disruptive for the entire value chain, and so world trade is no longer contributing positively to growth; second, even if the United States and China reach a trade agreement, the “plate tectonics” between an established power (the US) and a rising power (China) will result in a “cold war” on the technological and geostrategic fronts, thereby continuing to generate uncertainty; finally, economic analyses, whether in comments or indicators,  do not forecast any imminent re-acceleration of industrial growth.

Consequently, we anticipate that worldwide growth will trend slightly downwards (3.3% in 2019 and 3.2% in 2020), mainly due to the biggest emerging countries (China and India) and the more “fragile” of them (Brazil, Turkey and Russia). In the developed countries, our growth profiles for the next 18 months are either in line with potential (United States) or below potential (eurozone and United Kingdom).

End of cycle anticipated in the United States from the second half of 2021.

Our economic scenario now indicates that the American economy will enter the downward stage of the cycle in the second half of 2021, starting with businesses. The profitability of “corporate America” is already fragile and is expected to deteriorate even further with the continued rise in salaries (see chart 1). 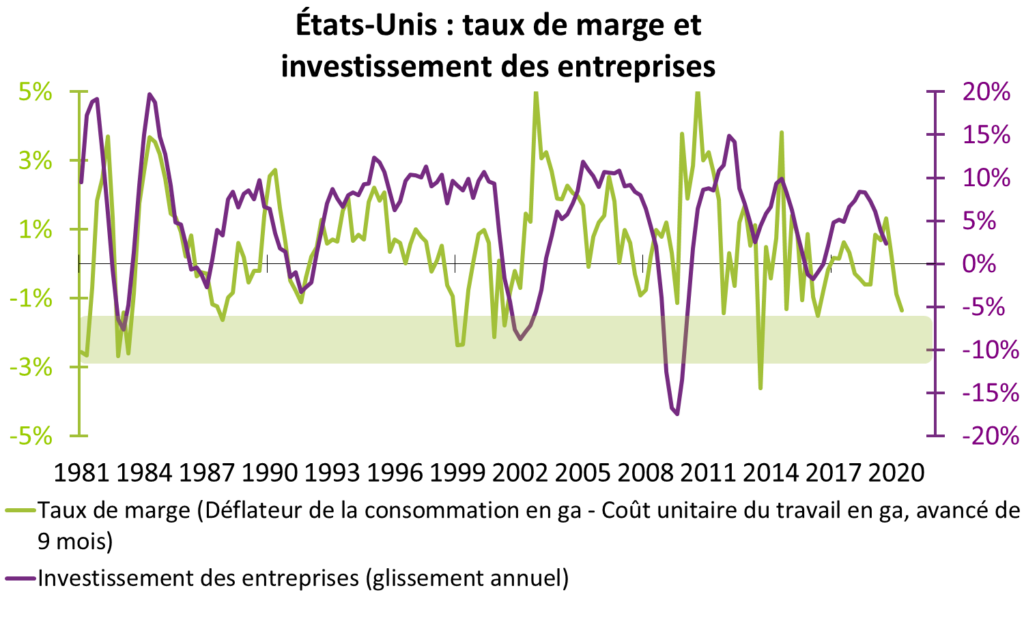 As a result, the combination of worsening profitability, high debt and persistent uncertainties will trigger a tangible correction of production and investment and, finally, an end of the expansionary phase and, in the final analysis, a “classic” end of cycle in its progression over time. This diagnosis is confirmed by our proprietary model, which shows an increasing probability of recession (chart 2). 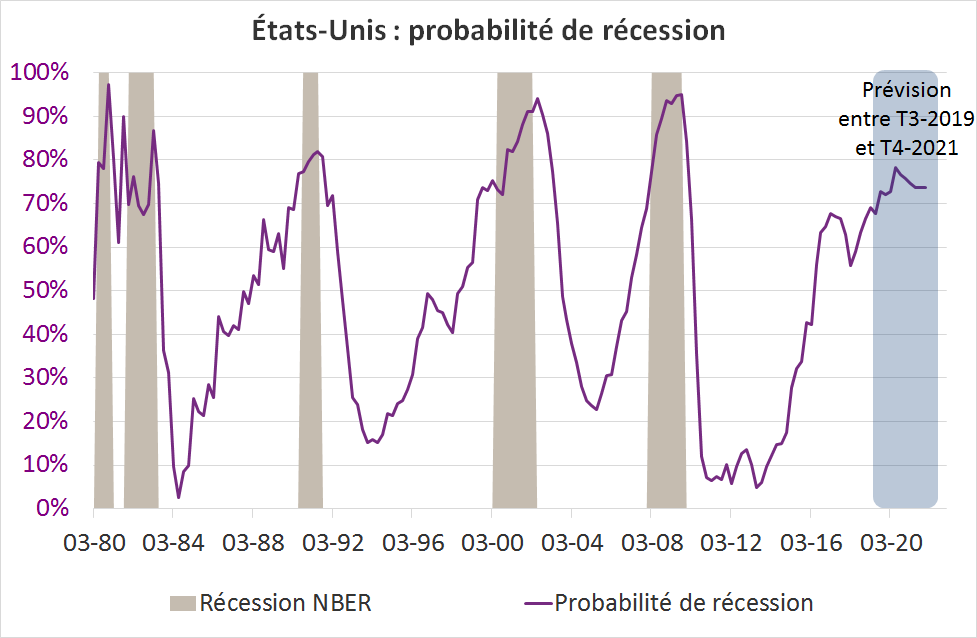 Economic policies have not reached their limits

In the short to medium term, central banks no longer need to continue easing monetary conditions, except for the Bank of England or the central banks of some emerging countries (such as Turkey and Russia) due to deflation.

In the longer term, economic policies will have to remain very accommodating and increasingly centred on fiscal and budgetary policies. This is because the arguments in favour of adopting expansive fiscal policies as a means of bolstering economic activity are mounting, with monetary policies constrained and less effective, a long-term environment of low growth, a limited debt burden with zero or negative interest rates, the need to correct inequalities of income, wealth and access to certain services (such as education and health), inadequate public investment and the absence of any negative impact on private investment (at this time, fiscal stimulus will not crowd out private investment, which has already been disappointing for a long time). For example, we anticipate that central banks will explicitly provide governments with visibility over interest rates, in order to enable public investment to take up the slack. Ultimately, the environment of sustained low interest rates will even constitute a historic opportunity to turn this situation to advantage and come out stronger, by financing strategic investments in digital, demographic and energy transitions.

In the particular case of American monetary policy, the environment is characterized by monetary conditions that are currently not very accommodating, a central bank that is increasingly preventive and the prospect of an end of cycle. For these reasons, our monetary policy scenario is divided into three periods: i) a strategy of adapting to the environment (insurance cuts) with 3 reductions in interest rates already in 2019; ii) a sustained status quo, but with a downward tendency, which we translate into two rate reductions of 25 bps during 2020 to compensate for the risks exerting downward pressure on growth and iii) a rate reduction cycle starting in the second half of 2021 to offset the negative effects of the end of the expansionary phase of the economic cycle.

In the case of the ECB, the current room for manoeuvre is limited. More resources are available in the area of fiscal policy, due to the environment of sustained low interest rates, but this leeway will not really be put into action unless or until the economic situation deteriorates significantly. This conclusion is based on the observation that European decision-makers have always been reactive and never proactive. For example, we do not expect any major fiscal stimulus in Germany. 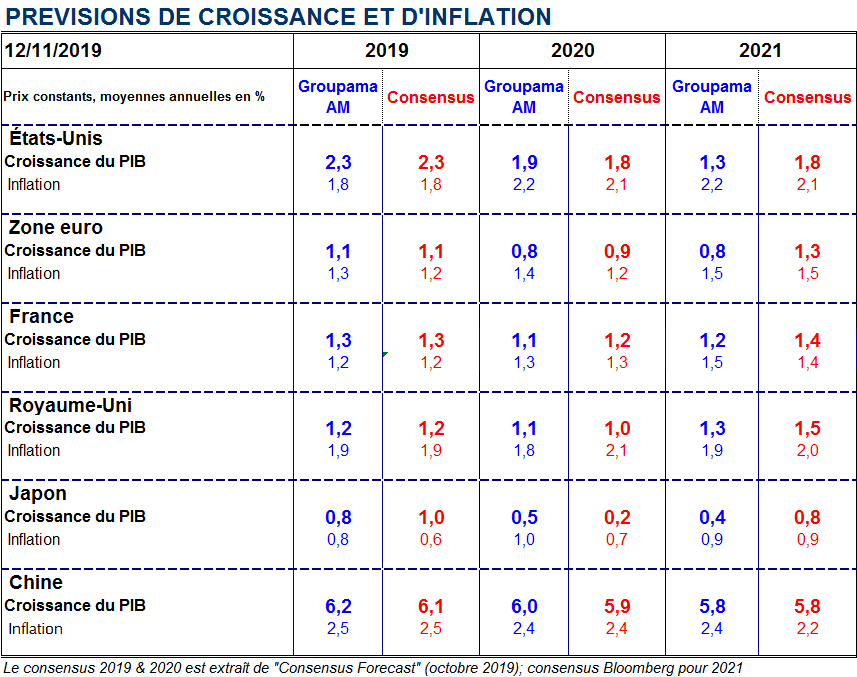