Flash G STAR – A favourable context for our strategy

Dislocation of the bond universe, a favourable context for our strategy

The risk budget is managed in particular by establishing hedging strategies. In addition, the portfolio construction is based on two pillars of performance generation:

The rapid propagation of Covid-19 in early March in Europe opened a new chapter in the history of major global economic and financial crises. Progressively, Covid-19 has brought with it the shutdown of entire sectors of the globalized economies.

As a result, in the space of a few weeks, most companies had abandoned all their normal benchmarks. The markets entered “panic” mode: certain alternative or index-tracking strategies (ETFs) experienced violent reallocations, very often with extremely sizeable redemptions that triggered sudden and massive corrections on all asset classes, including fixed-income products.

Many investors wanted – or were forced – to raise their liquidity levels, and short-term credit and money-market assets were easy targets for sale. These flows resulted in a total dislocation of the High Yield and Investment Grade credit markets. The short-term credit segment did not escape this trend, with spreads not seen since 2012.

Looking at the graph, we can also see that credit curves flattened (with the spread of the 1-3 year segment at a similar level to the spread of all curve segments), resulting in a renewed attractiveness of corporate debt instruments with short-term maturities.

In our view, by the responses of national governments which will enable many companies to overcome their short-term cash issues. Also, the central banks have provided strong responses to reboot the economy and ensure the companies’ financing needs over the next few months. Additionally, central banks have beefed up their asset purchase programmes and are now increasingly focusing on corporate debts.

In this light, we consider that the credit asset class is out of danger, except for specific risk, and is largely supported, thereby justifying a reduction in the risk premium.

Moreover, for securities with maturities of less than 5 years, we consider that the risk of a credit event on high-quality credit issuers (Investment Grade) is very low, for both financials and non-financials. We therefore expect a powerful bounce-back towards par. Consequently, we have invested significantly in Investment Grade securities and, for diversification, in higher-rated High Yield securities.

Breakdown by rating (excluding cash and other liquidities): 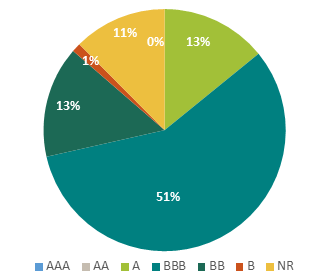 The market recovery has been consistent since the low point reached in March but has varied in pace according to the different “risky” asset classes. In particular, the recovery of emerging market debt in hard currencies has been more tentative.

We therefore consider that there is value in certain debt instruments in the emerging countries. We select debts (of short residual maturity, generally less than 18 months) from economically solid countries that have put the coronavirus contamination behind them, especially, therefore, in Asia. For example, we are investing in Indonesian debt, which on 30 April 2020 had only 10,000 confirmed cases of people with Covid-19, out of a population of almost 270 million inhabitants.

Yield to maturity of the asset classes constituting the core of the portfolio:

Attractiveness of the primary market compared to credit

The primary market, which had been closed or almost closed since the stock market storm at the end of February, reopened in mid-March following the reassuring announcements of central banks. Issuers wishing to finance or refinance their activities came to the market with generous premiums (sometimes of about forty basis points) compared to the existing issues, at a time when issue spreads had already widened considerably during the crisis. We participated actively in these issues, in order to capture the extra yield offered compared to the secondary market.

Taking advantage of overreaction with regard to Italian debt

Italy, as the epicenter of the pandemic in Europe, was one of the first countries to order lockdown of its population. It will therefore have a heavy price to pay for the shutdown of its economy, at a time when the country was already deep in debt. So, Italian sovereign debt was severely buffeted, and its spread against Germany widened considerably. The short-term segment (2 years) was no exception:

However, the announcements of the ECB have been partly aimed at averting panic runs on Italian debt. The discussions engaged with the members of the European Union are also aimed at ensuring a more evenly distributed effort from the most fragile economies when it is time for the economy to restart. Consequently, the spread between Italy and Germany has not reached the levels observed during the political deadlock of 2018. However, the volatility of Italian debt is particularly marked:

Source: Bloomberg, data as on 30 April 2020 Volatility over 12 months with weekly data

We therefore aim to take advantage of any excessive movement of volatility, in an environment where the ECB will remain at the country’s side, whatever the cost. In this sense, the recent comments by Christine Lagarde (ECB conference of 7/05) reaffirm the will of the European Central Bank to act in favour of “non-fragmentation” of the debts of the Eurozone countries.

Credit curves have flattened, as have yield curves: in this context of economic recession, the long parts of the curve generally fall more than the short-term segments, causing a flattening effect. The announced economic stimulus measures, which will bear fruit once the economies are reopened, will cause the longest-term segments of the curves to rise again. At the same time, we consider that the short-term ends of the curves will remain static at their historically low levels, given that central banks have confirmed they will be maintaining their ultra-accommodative policy for a long period, at least while inflation is not approaching its targets.

Inflation expectations (breakeven in the market) have been given a cold shower by the entry of the developed economies into recession. In the United States, tens of million people have lost their jobs in a few weeks, which will inevitably push down their wages and consumer prices. The vertiginous fall of oil prices is adding to the fears of deflation.

The American breakeven inflation rates (in this case the expected inflation on 5-year in 5 years) therefore fell to their historic lowest point.

However, the American Federal Reserve massively increased the money supply, and the Trump administration, aiming for re-election at the end of the year, will considerably increase its spending and is even envisaging cutting taxes on the working classes. The Covid-19 crisis could also give Donald Trump ammunition in his latent conflict with the Chinese: a renewed tariff war could drive up inflation on imports into the country.

In this context, we believe that American breakeven inflation rates could rebound, or at least rebound more strongly than the European breakeven rates.

The crash of the “risky” asset classes due to the spread of the coronavirus has caused a downturn in the net performance of G Fund Short Term Absolute Return. Since the beginning of the year (as of 30 April 2020), the fund’s performance stands at -2,39% (share class I-C, LU1891750942) compared to -0.15% for its reference index, the Eonia capitalised.

In particular, the fund has suffered from the widening credit spreads, especially on financial subordinated debt. Our hedging policies (protection on credit derivative index, long yen, long US Treasury Bonds) have absorbed some of the impact of this fall.

The markets are expected to remain volatile for several months, leading to a bumpy ride for the future performance of the fund. However, the current yield to maturity of the fund (Eonia + 180 basis points) and the general short maturity of the securities in the portfolio should allow a gradual recovery of performance.

Normalization of the financial environment and the absorption of market dislocations should also prove to be sources of future performance.

This document contains information concerning G FUND – SHORT TERM ABSOLUTE RETURN, a compartment of G Fund (also referred to as “the SICAV”), a Luxembourg-based undertaking for collective investment in transferable securities (UCITS), covered by part I of the Law dated 20 December 2002 and constituted in the form of a “SICAV”(Société d’Investissement à Capital Variable – a European publicly traded investment company structure for open-ended funds). The SICAV is registered with the Luxembourg Trade and Companies Register under number B157527. Its registered office address is 5, allée Scheffer, L-2520 Luxembourg. G Fund was authorized for trading by the Luxembourg financial authority CSSF (“Commission de Surveillance du Secteur Financier”).